Balazs Nagy, 36, moved to London from Hungary in 2012 and has been commuting between Budapest, London and Los Angeles ever since. He has been involved in music memorabilia auctions for more than 12 years, and “in all probability” owns one of the most extensive Michael Jackson memorabilia collections in the world.

What do you collect?

I collect almost every Michael Jackson record officially released during his lifetime. I do not buy posthumous releases. I may be old-fashioned, but I prefer listening to music on my record player whenever I can, except when I have to use YouTube (e.g. when I’m working). I don’t even keep songs on my phone, and I don’t care about CDs, either. A couple of years ago, I got disenchanted with my CD collection, and sold it overnight to begin collecting vinyl, although by that time it featured 300 different Michael Jackson discs. I quickly became fascinated with the subtle crackling sounds of vinyl and the smell of old record jackets. My collection is growing at a healthy pace, and I currently own hundreds of 7” and LPs from Michael Jackson. When I find a rare Mexican vinyl, I do not think twice about breaking my piggy bank open.

Besides rare LPs, my collection also features a lot of memorabilia directly related to Michael Jackson. These include signatures, stage-worn clothes, as well as gold and platinum album awards. However, I have always believed that Michael Jackson’s greatest, most complex and emotional work of art was not his music, but his estate in California, known as Neverland Valley Ranch. I really enjoy collecting items that originate from, or relate to, this place. I have already visited the gates of Neverland Ranch three times. Unfortunately, it is not open to the public, so fans must stop at the gates. Despite this, I wouldn’t call myself an obsessive fan(atic); I could always see Michael Jackson’s mistakes, too. As a fan, I have a strong but objective opinion of most aspects of his life, which sometimes makes me unpopular in fan communities. 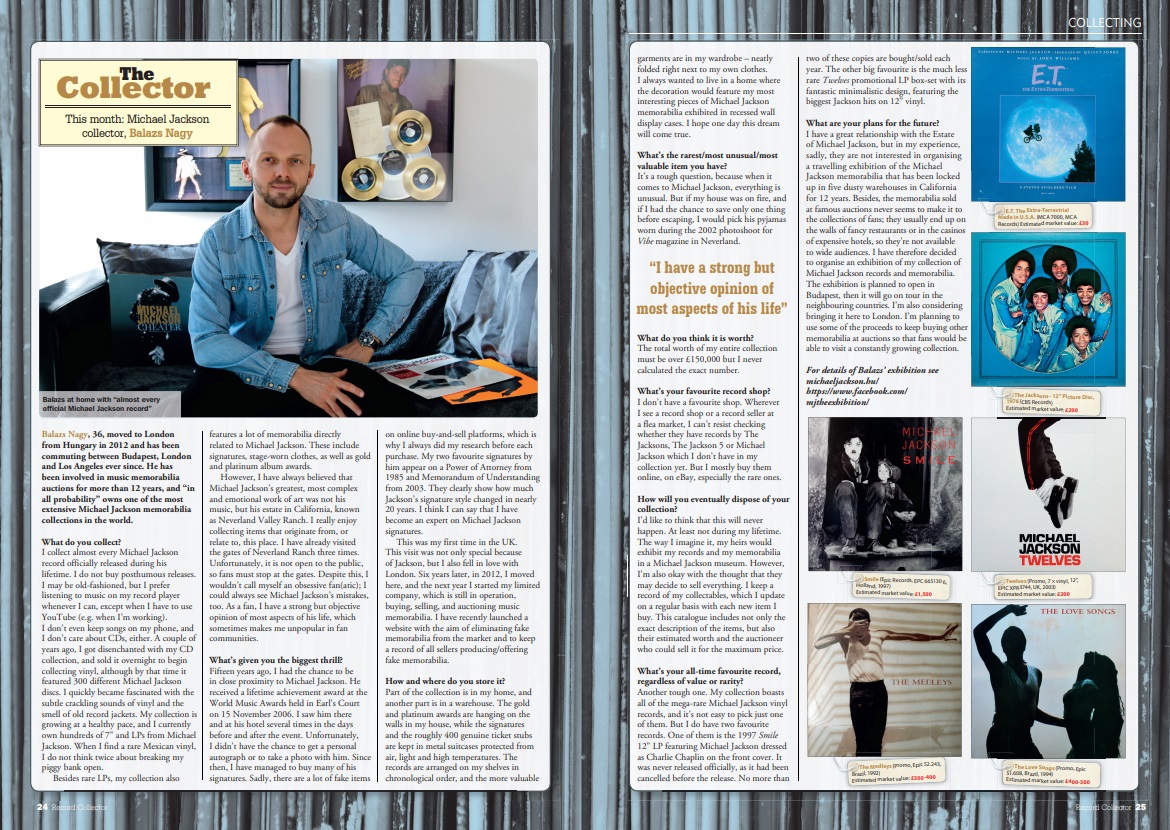 What’s given you the biggest thrill?

Fifteen years ago, I had the chance to be in close proximity to Michael Jackson. He received a lifetime achievement award at the World Music Awards held in Earl’s Court on 15 November 2006. I saw him there and at his hotel several times in the days before and after the event. Unfortunately, I didn’t have the chance to get a personal autograph or to take a photo with him. Since then, I have managed to buy many of his signatures. Sadly, there are a lot of fake items on online buy-and-sell platforms, which is why I always did my research before each purchase. My two favourite signatures by him appear on a Power of Attorney from 1985 and Memorandum of Understanding from 2003. They clearly show how much Jackson’s signature style changed in nearly 20 years. I think I can say that I have become an expert on Michael Jackson signatures.

This was my first time in the UK. This visit was not only special because of Jackson, but I also fell in love with London. Six years later, in 2012, I moved here, and the next year I started my limited company, which is still in operation, buying, selling, and auctioning music memorabilia. I have recently launched a website with the aim of eliminating fake memorabilia from the market and to keep a record of all sellers producing/offering fake memorabilia.

How and where do you store it?

Part of the collection is in my home, and another part is in a warehouse. The gold and platinum awards are hanging on the walls in my house, while the signatures and the roughly 400 genuine ticket stubs are kept in metal suitcases protected from air, light and high temperatures. The records are arranged on my shelves in chronological order, and the more valuable garments are in my wardrobe – neatly folded right next to my own clothes. I always wanted to live in a home where the decoration would feature my most interesting pieces of Michael Jackson memorabilia exhibited in recessed wall display cases. I hope one day this dream will come true.

It’s a tough question, because when it comes to Michael Jackson, everything is unusual. But if my house was on fire, and if I had the chance to save only one thing before escaping, I would pick his pyjamas worn during the 2002 photoshoot for Vibe magazine in Neverland.

What do you think it is worth?

The total worth of my entire collection must be over £150,000 but I never calculated the exact number. 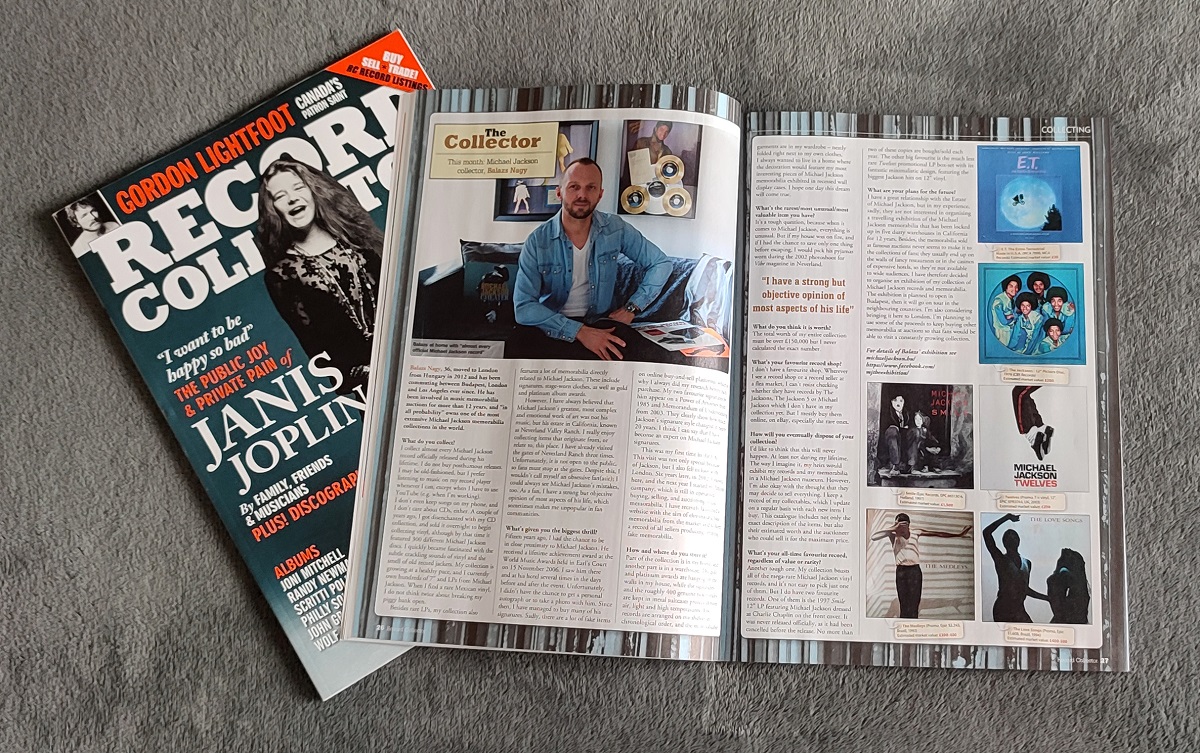 I don’t have a favourite shop. Wherever I see a record shop or a record seller at a flea market, I can’t resist checking whether they have records by The Jacksons, The Jackson 5 or Michael Jackson which I don’t have in my collection yet. But I mostly buy them online, on eBay, especially the rare ones.

How will you eventually dispose of your collection?

I’d like to think that this will never happen. At least not during my lifetime. The way I imagine it, my heirs would exhibit my records and my memorabilia in a Michael Jackson museum. However, I’m also okay with the thought that they may decide to sell everything. I keep a record of my collectables, which I update on a regular basis with each new item I buy. This catalogue includes not only the exact description of the items, but also their estimated worth and the auctioneer who could sell it for the maximum price.

What’s your all-time favourite record, regardless of value or rarity?

Another tough one. My collection boasts all of the mega-rare Michael Jackson vinyl records, and it’s not easy to pick just one of them. But I do have two favourite records. One of them is the 1997 Smile 12” LP featuring Michael Jackson dressed as Charlie Chaplin on the front cover. It was never released officially, as it had been cancelled before the release. No more than two of these copies are bought/sold each year. The other big favourite is the much less rare Twelves promotional LP box-set with its fantastic minimalistic design, featuring the biggest Jackson hits on 12” vinyl.

What are your plans for the future?

I have a great relationship with the Estate of Michael Jackson, but in my experience, sadly, they are not interested in organising a travelling exhibition of the Michael Jackson memorabilia that has been locked up in five dusty warehouses in California for 12 years. Besides, the memorabilia sold at famous auctions never seems to make it to the collections of fans; they usually end up on the walls of fancy restaurants or in the casinos of expensive hotels, so they’re not available to wide audiences. I have therefore decided to organise an exhibition of my collection of Michael Jackson records and memorabilia. The exhibition is planned to open in Budapest, then it will go on tour in the neighbouring countries. I’m also considering bringing it here to London. I’m planning to use some of the proceeds to keep buying other memorabilia at auctions so that fans would be able to visit a constantly growing collection.